Christmas Dress for my 6 Year Old

One of my sewing goals listed here was to sew Christmas dresses out of taffeta for my daughters.  I've never sewn with taffeta and have wanted to try it for some time.  I've also never sewn an overlay or a tulle underskirt so there were several unknown variables for me in this make.  One thing I love about sewing garments is that there is always something new to learn- be it a new fabric, a new technique etc and that keeps my mind whirring- in a good way.

The Pattern:
This is the first of the two Christmas dresses and I used Simplicity 1507.  I made a size 6 and changed the length of the skirt.  I was going for tea length instead of the longer length featured on the pattern cover.  I used another pattern with the skirt length I wanted to help decide how much to remove from the length.  I think I removed about 4 1/2 inches.  I also wanted the overlay and skirt to be about the same length rather than the way the pattern had it with the overlay noticeably shorter.  Construction wise, I don't know if it was me or the instructions but in some places I had a bit of a tough time discerning the directions.  Granted some of these technique's are new to me so something new always sounds foreign at first.  The skirt has quite a few layers to contend with (overlay, skirt and lining with tulle attached.)  I was confused by the directions when referring to the lining because they call it both a lining and a slip.  This isn't a difficult dress to make just fiddly which is to be expected with the floofiness of it. 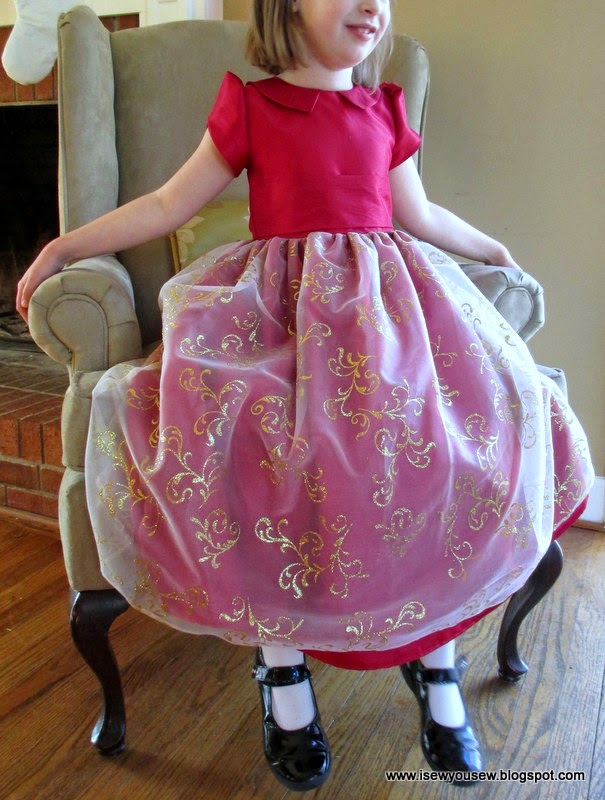 My favorite features of this dress are the collar, the tie back sash and the sleeves. I.love.those.sleeves!  I wasn't sure how they would come out but they are beautiful.  They have this tulip like feel to the gathers at the top that are so sweet and the cut out shaping is gorgeous.  Now I want sleeves like this on a dress!  The collar is also adorable in my opinion- one thing to note the instructions don't tell you to interface the collar- so interface the collar.  It needs it.  Believe me, I didn't and had to tack the collar down in a few spots because it looked a bit floppy.  I should've trusted my intuition to interface it but oh well.  I love the sash but I always love sashes on girls dresses.  My only beef with this one is that the placement markings on the bodice pattern piece that are supposed to correspond with the front sash don't line up properly so you are left to guess at the correct placement.  I think I could've moved mine a smidge down toward the waist but I was worried it would then get caught in the waistband stitching.

The Fabric
The taffeta is from Hancock Fabrics and I prewashed it in a cool wash and tumbled dry low. I read about taffeta in my Vogue sewing book and it was somewhat helpful.  I was really careful to take my time when making the dress and to serge any of the taffeta's raw edges because taffeta likes to fray.  It frays into this webby type stuff that sticks like mad to dry winter fingers. ugh.  I used the smallest needle I could find to sew and in a few spots if you held the fabric toward the light you could see minuscule thread catches.  It was so minor I didn't worry about it but it made me wonder what professionals use since the size 8 needle was the smallest Hancock had in stock.  I wouldn't have thought to go down that small but one of the ladies who works at Hancock's suggested that I do.  One other note about taffeta is that if you baste and remove your basting stitches you might have some small evidence in the fabric.  So baste inside of the seam lines and you can avoid those holes.

The overlay and tulle I hand washed before using as well.  The overlay is a delicate mesh, I think nylon but it said on the bolt to hand wash it.  So if this dress gets dirty I will have to hand wash it- but that's to be expected and I don't mind hand washing, its dry cleaning that I loathe. The overlay is also from Hancock Fabrics.  To hem this overlay I stitched 1/4 inch from the edge then folded on that line and then once again and stitched down the roll.  So in essence a rolled hem.  I lined the dress with some poly lining from Joann Fabrics and the tulle is from Hancock too.  What can I say Hancock's is down the street from my house! 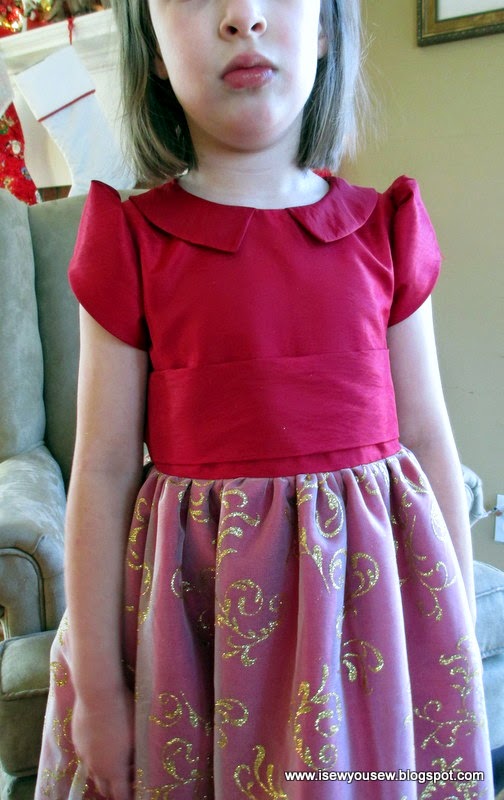 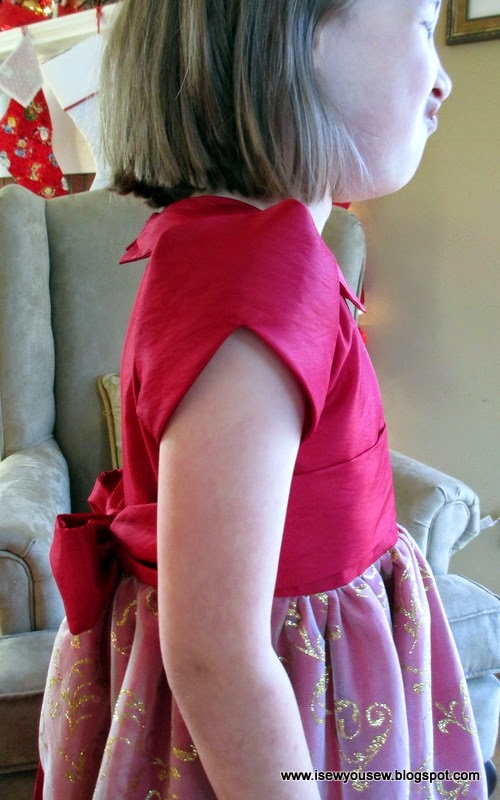 Will she wear it?
Lately when I blog I've been using the headings "The Pattern, The Fabric, Styling" but I think now for kids clothes I won't worry with styling but instead talk about weather or not I think my child will wear it.  I ALWAYS wonder that about the things people sew for their children because, quite honestly my daughter would NOT wear some of the adorable artsy stuff I see people sew for their kids (I've tried it to no avail).  So for me figuring out if my child will actually wear the garment is part of the puzzle.  You won't see a lot of artsy, edgy stuff from me here, it never leaves the dresser drawers in our house.

So all that to say, yes, she will wear it to church, she begged to play in it after we took pictures and I made her put her hand over her heart and swear not to roll around on the floor in it and to try to the best of her ability to take care of it.  She laughed but there was no rolling around.  She played in it for a while and tested out the twirlability and loves it.  She said she feels like a princess.  And that is just what I was hoping for, its the whole reason I picked out that glittery overlay because I knew she would love it.  She stood in the sunshine and said "I sparkle!"  It makes it sooooo worth it when she loves a dress and feels special in it.  She is a great muse for me since I probably wouldn't have picked that sparkly overlay out without her preferences in mind and it really jazzy's up the dress. 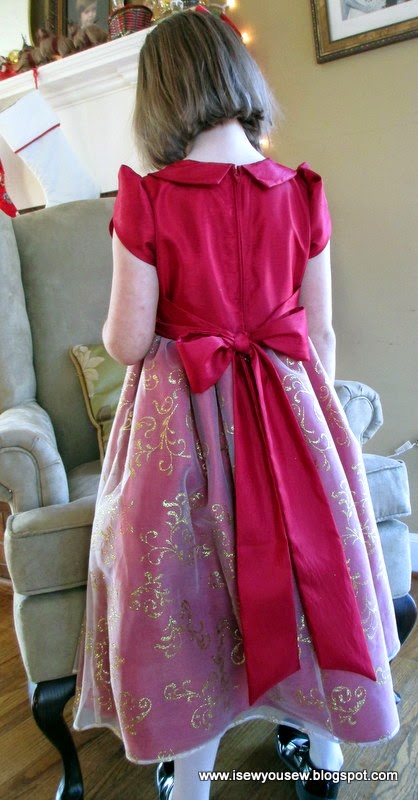 A few more shots of the skirts.  Below is the skirt under the overlay. 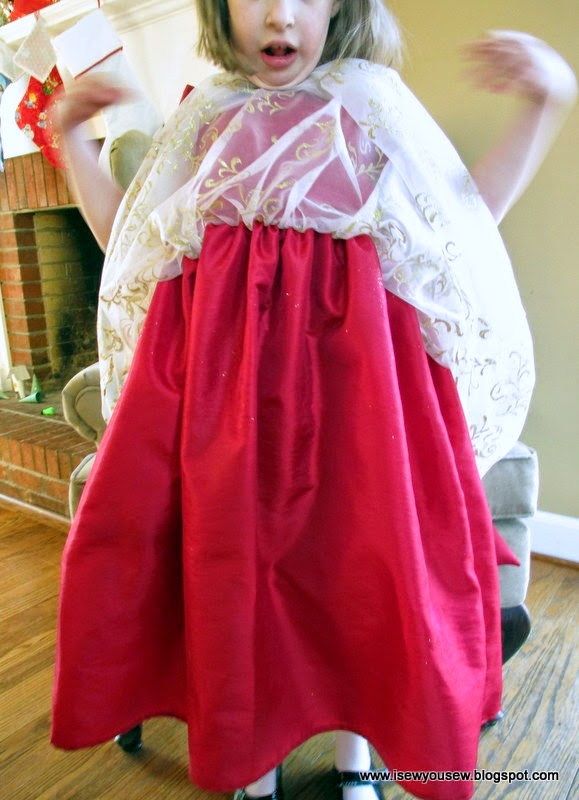 The lining with two rows of tulle attached for floofiness. 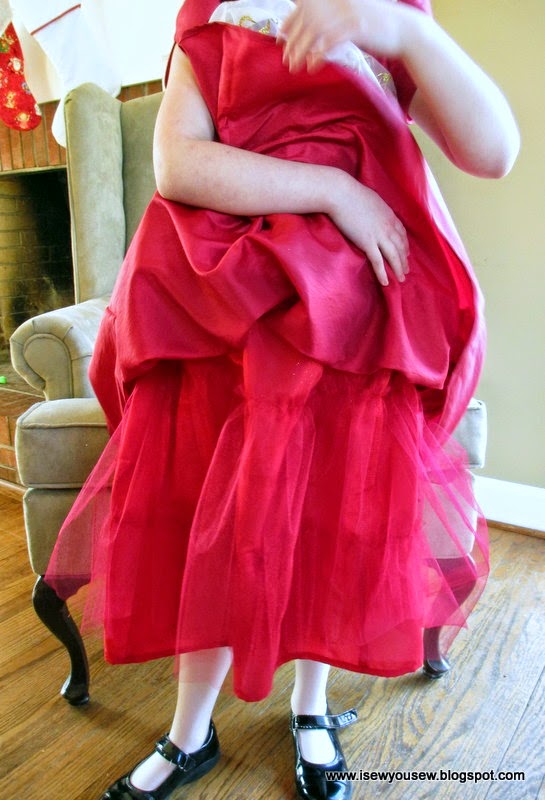 So one taffeta dress down and now one to go!!!  Fingers crossed this next one won't be quite as fussy but hopefully just as adorable!
Posted by Elizabeth at 4:14 PM 2 comments: