Another Grainline Studio pattern for me here.  When I saw the teasers from Jen, the architect behind these patterns, I knew that I would want the pattern for a Mother's Day gift.  So I told my husband "don't buy me any Mother's Day gifts, I'll take care of it."  And when the pattern was released there I was ready to buy it! See a sewist makes her husbands life easier- right!! 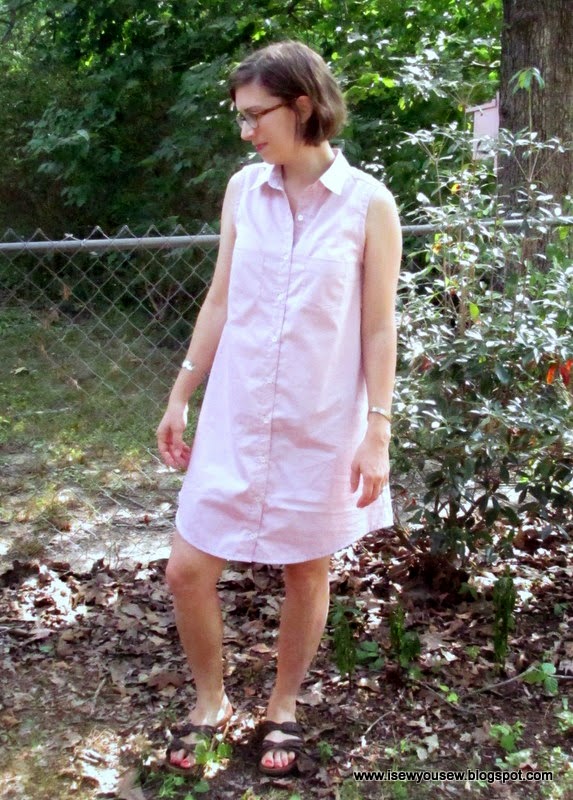 Back to the pattern- its the Alder Shirtdress and since I've had success at fitting my body to these patterns I knew I would be happy with the results.  I read on a couple of other sewing blogs that the fit of this dress was different from the fit of the Archer button down shirt by Grainline so I was careful to choose a size 4 for my shoulders grading to a size 6 at the bust, waist and hips.  This seems to have almost worked perfectly for me except for a few puckers around the upper bust.  Not sure what those are I think it might be from the pockets since they have to fit around the front bust darts??  But don't really know- they seem to point to the third button but when I button the next button up they disappear.  Not something I'm too worried about, more curious. 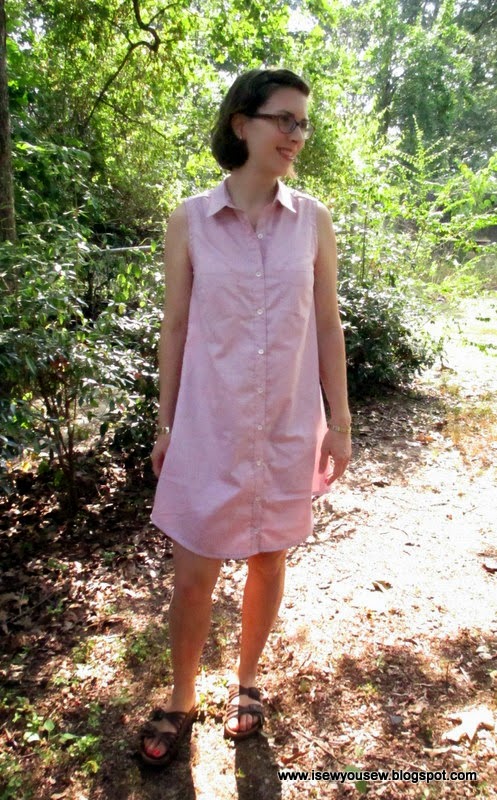 The fabric I used was some pink shirting type stuff I thrifted.  I know its cotton but it is like a nicer, thinner shirting, crisp and has a crossweave of pink and white threads.  It shows all kinds of weird looking wrinkles in these pictures so its not the most fluid fabric.  I really like the A-line shape of the dress but my husband isn't such a fan, he suggested a belt (always makes me laugh when he gives styling advice) and I had to agree with him this time that a belt might make this one look a little better.  I think a heaver, drapier fabric wouldn't need a belt. 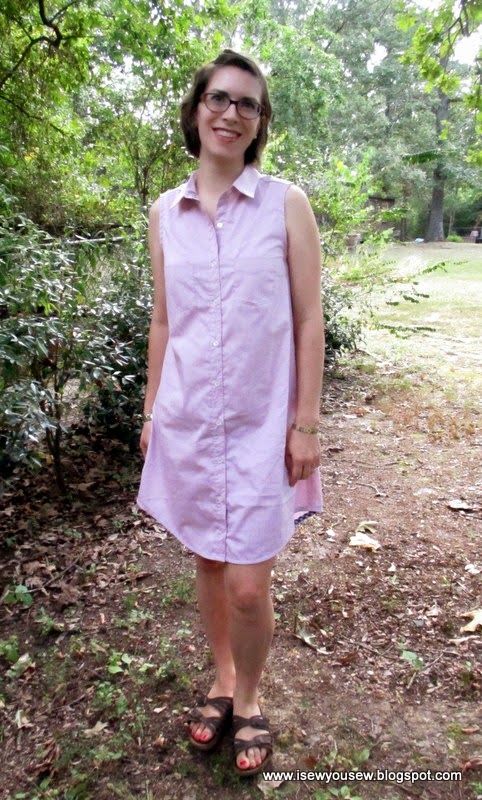 As far as sewing this up...you have to use a tailor's ham or rolled towel to mimic the chest under the front of the dress panels when pinning the pockets in place because they are shaped on top of a dart.  If this is confusing the Grainline website is having a sew-along right now that will eventually cover this step.   The construction wasn't intimidating for me since I've made the Archer button up shirt twice but if you've never done a button up I, again, recommend going to the Grainline site for help.  Also I finished my hem with gingham bias tape.  Which gave me a smidge more length- not that the dress is too short, I'm just careless when bending over to help my children so any extra coverage is usually to my advantage. 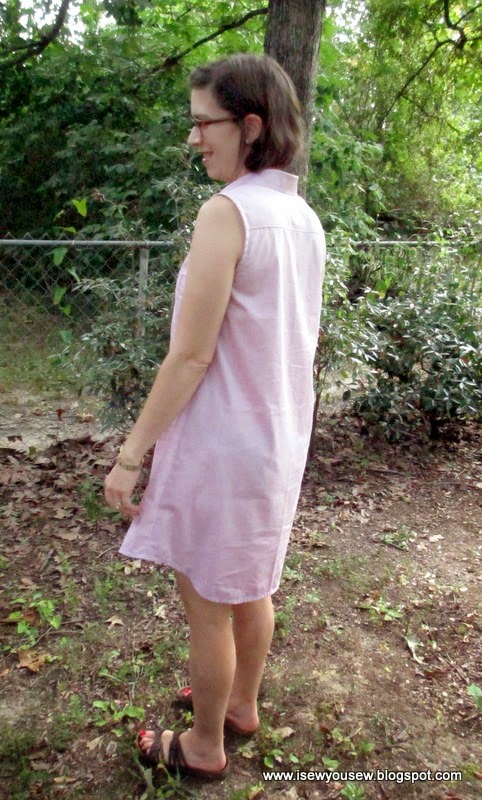 Now this is not the most flattering angle- I admit- but I only think it fair to let other sewists see even the "is she going out to her mailbox in a muu muu" angle pictures.  I personally think that all the other angles on this dress look perfectly fine, its just this one that is screaming for a belt.  Its fair to say that I am probably going to have to make every single variation of this dress that is covered in the Grainline sew-along because they all look adorable.

I'm linking this up to a sundress sew-along hosted by Heather at Handmade by Heather B which has been fun to participate in and Frontier Dreams Keep Calm, and Craft On!
Posted by Elizabeth at 12:20 PM

Email ThisBlogThis!Share to TwitterShare to FacebookShare to Pinterest
Labels: Grainline Alder Dress, Women's sewing
Elizabeth
I first began sewing with vintage Barbie dress patterns at 8 years old. I was a prolific Barbie dress maker until I was too old to make doll clothes. I began sewing again 6 years ago and haven't stopped since.